Paleochora is a traditional Cretan Village with a relaxed atmosphere. 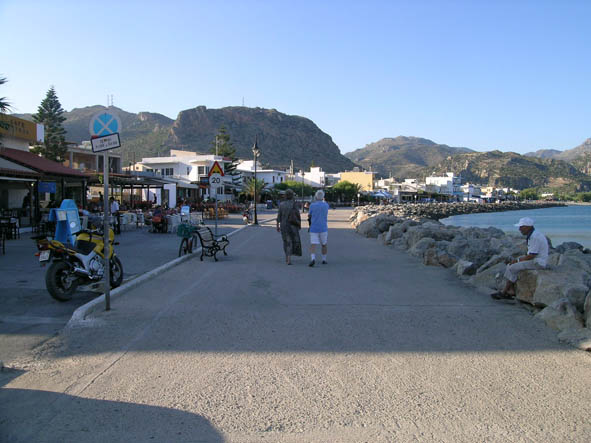 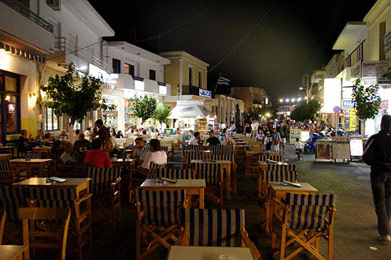 Paleochora, Crete is a small town on the southwest coast of the Chania prefecture, some 77 km from the city of Chania, making it the south-eastern most geographical position of the European Community.

It is bulit on a small peninsula of 400m width and 700m length which has beaches on both sides and steep mountain slopes of the White Mountains in the back, forming a natural protection against the South Winds. The Libyan Sea wets its coast of 11km in length.

It seems that nature and man have lived here in a mystical union throughout the ages. The beautiful landscapes, the abundant wildlife, the vivid history and the fantastic seascapes and the perfect climate, blend it all with the contemporary life of great villas and picturesque and traditional coffee shops, open air summer theatres, discos and modern cafeterias, creating a memorable sensation for any traveler.

Paleochora's economy is based on tourism and agriculture (mainly tomatoes cultivated in glass-houses and olive-oil). It has been a relaxing holiday place since the early 70's when it was renowned for being the centre for hippies.

Paleochora is built on the ruins of the ancient city of Kalamydi and the larger area is rich in medieval Byzantine memorials. There are many small Byzantine chapels with interesting and rare wall paintings as well as the remains of early Christian churches. Local attractions include wall paintings in some of the churches (those in Anidri and Voutas being particularly impressive), and a museum dedicated to the Acretans in the town itself.  The nearby village of Azogires, 5km away, contains a museum dedicated to the area as well as the, now empty, Monastery of the 99 Holy Fathers and what is claimed to be the largest Evergreen Plane Tree on the Island.

In 1278 the Venetian General Marinos Gradengos had the historical castle Selino built on the elevation overlooking the Libyan Sea. This memorial of the Venetian era - named the Fortezza remains today behind the village of Paleochora. The fort gave its name to the whole province, which was renamed Orina to Selino. The fort was destroyed in 1332 and rebuilt in 1334. Underneath the fort, the Venetians founded a new settlement named Vourgos for workers and merchants. The private Barbarossa destroyed the fort in 1539, but later in 1595 Dolf revamped it. In 1645 the Turk conquerors, modified and adjusted the the fort to their needs. In 1834 an English traveller named Robert Pashley found the fort completely destroyed and the whole area uninhabited with only a granary and one or two small buildings left. The re-inhabitation of the town known today as Paleochora began in 1866.

During the battle of Crete the town was the scene of fighting between motorcycle riding troops of the German 95th Reconnaissance Battalion and the Eighth Greek Regiment with elements of the Cretan Gendarmerie.

Nowadays Paleochora is one of the fastest growing tourist towns in Crete with crystal clear waters, well organised sandy beaches and beautiful, isolated little anchorages. Its population of 1500 inhabitants expands to 10,000 in the summer. Visitors will find many good restaurants, taverns, cafes, bars and nightclubs.